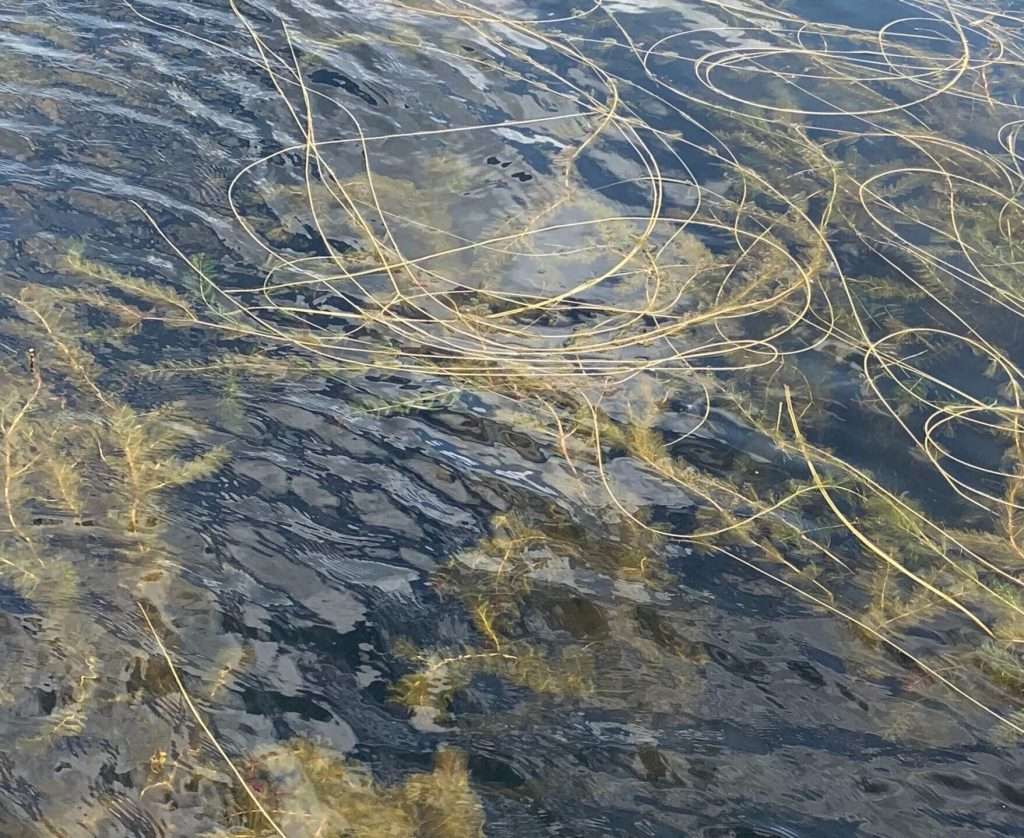 Eurasian Watermilfoil is an invasive plant that threatens Chateaugay Lake

Invasive species threaten waterbodies and landscapes and are a growing concern locally, nationally and globally. Once established they are difficult and expensive to control. Invasive species cost $137-$146 billion annually in the United States. In the case of Chateaugay Lake, over $500,000 has been spent since milfoil control began in 2008, averaging about $40,000 annually.

Species that are non-native to our lake and region and likely to cause ecological or environmental harm are considered “invasive.” A non-native species becomes invasive when it lacks predators and native parasites; produces many offspring/seeds; reproduces by multiple means; is a generalist outdoing natives for space; and monopolizes resources. In the absence of ecological controls such as disease and predators, non-native species can out-compete natives, which depletes the lake’s native biodiversity.

In Chateaugay Lake, the invasive aquatic plant Eurasian Watermilfoil is a serious problem and other invasive threats are on the horizon. The CLF works to prevent the establishment and spread of invasive species in Chateaugay Lake and its watershed.

What is Eurasian Watermilfoil?

Milfoil (Myriophyllum spicatum) is an invasive aquatic plant native to Europe, Asia and North Africa. It may have been first documented in North America in the 1940s and likely arrived either as ballast in large container ships or through the aquarium trade. Since it is not native to our waters, there are no natural predators to prevent its spread. This highly invasive aquatic plant has become notorious in the Adirondacks and beyond for clogging waterways, crowding out native plants, degrading wildlife habitat, and spoiling boating, fishing and swimming. Chateaugay Lake has native milfoil species that are non-invasive and other native plants that look similar to Eurasian watermilfoil and learning the difference is important.

Bladderwort is a carnivorous aquatic plant. It can be distinguished from milfoils by the small “bladders” along its leaves that capture small aquatic organisms. The flowers are yellow and grow above the water’s surface. This plant is native to Chateaugay Lake.

Coontail is a rootless native plant that floats freely. It can form dense formations in the water. Leaves grow in whorls of nine or ten on a stiff stem. The plant is very bushy and when taken out of the water resembles a raccoon tail. The stems and leaves maintain their shape when removed from the water. Coontail is native to Chateaugay Lake.

Eurasian and northern watermilfoils often hybridize. Hybrids have similar characteristics and may require genetic screening to distinguish them from non-hybrids.

How does it spread?

Milfoil spreads mainly through fragmentation of plant tips or through root expansion from rhizomes that anchor the plant to the lake bed. With fragmentation, even a very small piece can float away, re-root and begin a new plant. It is easily fragmented and moved around within lakes by boats or just by wind and wave action, or between lakes via boats and trailers.

Why is it a problem?

Milfoil spreads easily and grows quickly. Milfoil crowds out native plants, diminishes fish habitat and negatively impacts wetland habitats. Dense mats form near the surface. They entangle boat propellers and interfere with swimming and fishing. Multiple drowning deaths in the United States have been attributed to entanglement in milfoil. Eventually, milfoil impacts property values by decreasing the attractiveness, safety and enjoyment of the shoreline of the lake.

Photo: a boat on Hayden Lake in Idaho ISDA (https://www.boisestatepublicradio.org/post/invasive-plant-threatens-iconic-blue-heart-springs#stream/0)

Other Species of Concern

Unfortunately, milfoil is not the only invasive species that threatens our lake. The CLF is involved in monitoring the lake for other invasive species that are spreading throughout the Adirondack Park. Curlyleaf pondweed, an invasive aquatic plant, is found in the Narrows as isolated plants or in small clusters. Chinese Mystery snail has been present in Chateaugay for many years. In addition, zebra mussels, hydrilla, and spiny water-flea, among others, remain a threat but fortunately have not been identified in Chateaugay. Finally, a terrestrial invasive insect called woolly adelgid that kills off hemlock trees has been identified as far north as Lake George and could have a devastating impact on our watershed. CLF partners with other organizations in the park including the Adirondack Watershed Institute (AWI), and the Adirondack Park Invasive Plant Program (APIPP), among others, to keep abreast of these threats. The message here is keep educated about threats and remain vigilant!

This invasive plant is most recognized by its lasagna like crinkled leaves. It grows very early in the season and is usually gone by mid-July. The leaves are two to three inches long and have tiny serrations. The stem is reddish brown. It reproduces by a winter bud called a turion. It can be difficult to distinguish from clasping leaf pondweed.

Status in Chateaugay: Found in the Narrows and targeted for hand harvesting. Previously found and removed from spots in the Upper and Lower Lakes.

Spiny water flea is a zooplankton. It is very small and may not be detectable to the eye unless clumped together on something like a fishing line. Its exoskeleton is so unpalatable that no predators want to eat it. It is a dangerous invasive because it causes a breakdown in the food web from the bottom up and will seriously impact fishing in the lake.

Zebra mussels have been found in nearby Lake Champlain. They are prolific eaters filtering out impurities in the water. Cleaner water allows for light to penetrate deeper in the water column. It results in greater plant growth, including invasives. It also allows for deeper light penetration making waters warmer and impacting the cold water loving fish present in our lake.

Hydrilla is called the world’s worst aquatic invasive species because it grows so quickly once established in a waterbody. Its stems can be up to 25 feet long and it forms thick mats. Hydrilla could cause serious disruption to the ability to use our lake.

Hydrilla looks very similar to a native Elodea in Chateaugay. However, hydrilla has:

This snail was likely brought to the US from East Asia possibly as a source of food. They are large and have a distinctive bad smell. They impact the food web taking resources from smaller native snail species. They can also clog water intakes. Their shells break easily into sharp shards that cause cuts on bare feet.

Status in Chateaugay: Endemic throughout the lake

The Wooly Adelgid is an aphid-like insect that feeds on the sap of hemlocks causing death to the trees. In the fall, the insect attaches to the stems of new growth and creates a wooly covering so they can overwinter. The hemlock forests of the Adirondacks would be significantly impacted as well as our watershed if this invasive pest finds a foothold. The Adelgid has recently been found in Lake George and is migrating north.

Status in forests around Chateaugay: Absent

Use only certified bait

The DEC has a list of all acceptable bait that can be used in freshwater bodies within NY. This list can be found at https://www.dec.ny.gov/outdoor/74079.html.

However, several bait fish on the NYS list should not be used in the Adirondacks including Blunt Nose Minnows, Golden Shiners, Jumping worms (aka crazy worms), and the Rusty Crayfish.

Be sure to buy bait only from certified dealers. NY requires that you keep a copy of your baitfish purchase receipt and be prepared to show the receipt if asked by authorities.