The Chateaugay Lake Foundation was formed in 2007 to support environmental protection of Chateaugay Lake. The immediate threat was the rapid spread of Eurasian milfoil throughout the lake. A milfoil management plan was developed with assistance from the Adirondack Watershed Institute at Paul Smith’s College. An aggressive three-year program covering all of the shoreline was estimated to cost $1.5 million. The plan also identified several lower-cost options for treating the shoreline in phases, which would be more affordable but extend the time to achieve control. Resource constraints have led to a phased approach, focusing on the sites that are the most critical with the goal of expanding from there. 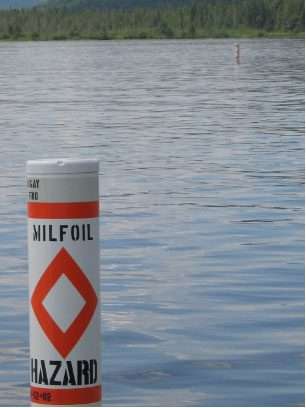 Fundraising began in 2007 and control activities began the next year. Over $342,000 was raised through 2013. This supported treatment by hand-harvesting and benthic matting at all of the priority sites except the South Inlet. The large bed in the South Inlet was marked off with hazard buoys to discourage boat traffic, pending future active treatment

By 2013, positive results supported continuation of treatment, but funds needed to be replenished. The Foundation developed a Designated Donations program to allow donors to direct their donation for use in a specific segment of Chateaugay Lake: Upper Chateaugay, Lower Chateaugay, or the Chateaugay Narrows. Donors also have had the option of designating their donation for “wherever needed most.” The intent has been to fund ongoing maintenance control in treated areas, while building funds to launch expanded treatment in each part of the lake.

The Designated Donations campaign has raised some $261,000 for milfoil control as of mid-2020. This has included about $31,000 for the Lower Lake, $10,500 for the Narrows, and $37,000 for the Upper Lake. The largest share of donations, about $183,000, have been designated for milfoil control wherever it is needed most. This generous support has allowed the control program to gradually expand from three weeks of maintenance control in 2016 and 2017, to five, six and seven weeks of hand-harvesting in 2018, 2019 and 2020. Control activities have been taking place in all three segments of the lake. Funds are also being reserved to have available as a match for grant applications that would allow treatment of the large bed in the South Inlet.

Hand-harvesting by SCUBA divers is labor-intensive. A week of work by a three-person team with two divers and one top-water support person runs about $7,500. It typically takes several years of treatment to reduce a dense milfoil bed to maintenance levels. Control must then be maintained to prevent regrowth. Significant reductions in milfoil density have been documented in the sites that have been treated. The ongoing challenge is to maintain the progress that has been made, while expanding control to cover more and more of the shoreline.

The Chateaugay Lake Foundation has developed estimates of three-year treatment costs for each segment of the lake, based on mapping of milfoil beds. Total costs for the three year plans are estimated at $783,000: $191,000 for the Lower Lake, $181,000 for the Chateaugay Narrows, and $410,000 for the Upper Lake ( see Milfoil Control Progress and Plans).see Milfoil Control Progress and Plans). The treatment plans can be approached in stages to manage these significant costs. To see the near-term goals that are a priority for each part of the Lake, click on the links below.

Make a Donation via PayPal